You might think finding a first job as a police officer wouldn’t be that hard.

It was 2012, and the new graduate from North Carolina’s Elon University had realized while studying journalism and criminal justice that she wanted to be a police officer.

“I applied all over,” said Mitchell, a Delaware native. “I was not really ‘in the know’ about how hard it was to get a police job, especially when you don’t have family in law enforcement.”

The job search led to all kinds of short-term roles – from waitressing to working a brief stint as a corrections officer in a prison to the district attorney’s office in Philadelphia, where she worked two years as a paralegal and realized “I definitely still wanted to work in law enforcement.”

By then, in a bigger city, she was able to land a job in 2016. She started on bike patrol right out of the academy and then moved to an area of the city known as “the heroin capital of the country,” she said. “So we were right in the midst of the opioid epidemic as fentanyl was coming out and people were getting hard with it.”

But last year, she was working in West Philadelphia when the need to make a change hit.

“Obviously, the whole world has kind of been under a lot of stress with the COVID pandemic, and I looked around at who was handling the response well and who was handling it poorly,” she said. “For a lot of people, their quality of life depends on their ability to move about freely and go to work and provide for their families, and I saw the impact of some of the restrictions people struggled with.”

It hit especially close to home.

“My mom lost her small business due to COVID because she lives in a place where restrictions kept her business closed so long she wasn’t able to come back from it,” Mitchell said.

“I was a front-line worker and worked the whole time, but I saw what it did to people who were crushed by serious restrictions. So my husband and I started looking for where we could relocate where there’s strong local leadership and support for law enforcement from the community and government.”

The search led her to Sioux Falls, where she didn’t know anyone but found the Sioux Falls Police Department willing to work through the hiring process with her. 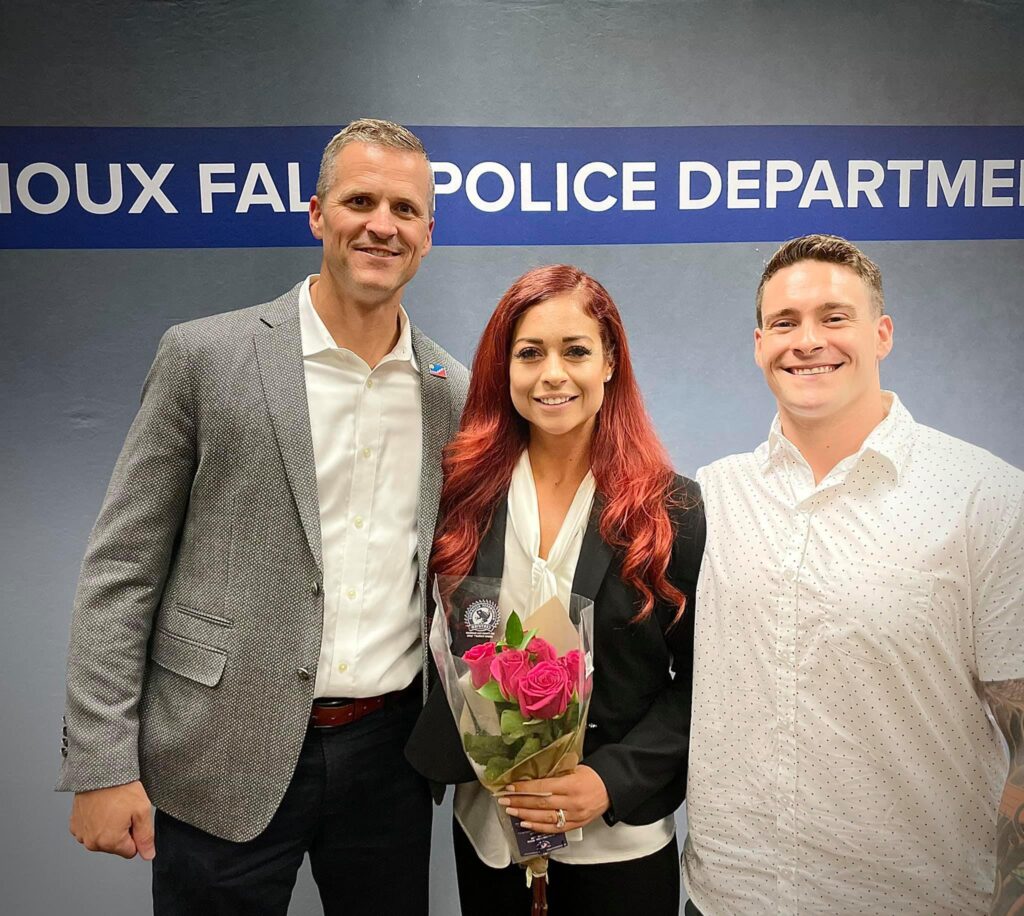 “They made it really nice and easy for me because I lived so far,” Mitchell said. “They consolidated all my testing into one week because I wasn’t sure I could swing it flying out more than once. So it was perfect because I was able to come out here in January and had my testing in the morning, and when it was done, we still had the night to explore the town and drive around and look at apartments and go out to eat and interact with people and see if it was a community where we could see ourselves moving.”

You read that right: They visited in January.

“Overall, there are so many little things people probably take for granted, like not having much traffic, and I know I haven’t hit the winter, but the weather’s been good so far,” Mitchell said.

“I just feel like the environment overall is extremely easygoing, and it’s very refreshing coming from a hustle-and-bustle environment in a huge city where everyone is rushing and honking at each other and not really concerned about the person on their left or their right.”

“They’ve already made a commitment to a law enforcement career; they just need to find a home where they can do that job well and an environment that will support and equip them. It’s great to see the number of law enforcement professionals that are reaching out to our department and want to make Sioux Falls their home.”

The city has seen more out-of-state recruits than anytime in the past, he added. 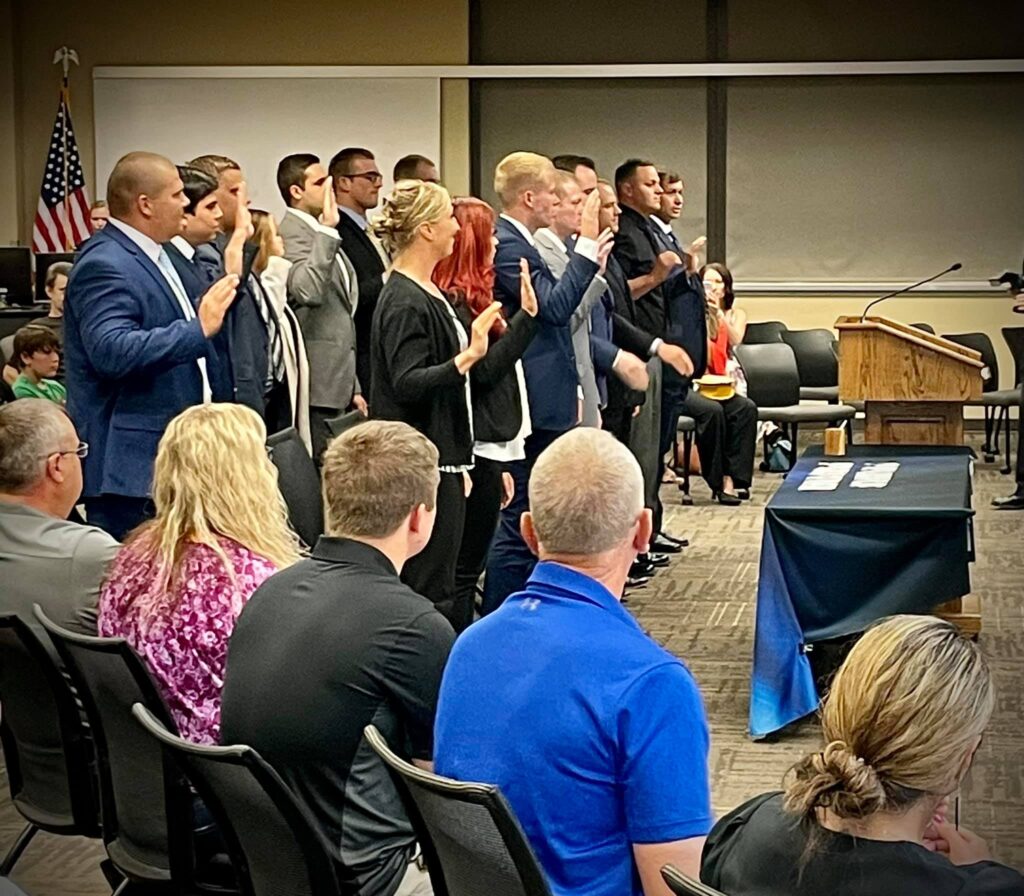 “From a recruiting standpoint, these officers come into our department with reciprocity and make the training and orientation process quicker and easier because of the skills they bring to the job day one,” TenHaken said.

“This community has always been a strong supporter of law enforcement, and we’re certainly seeing that in our out-of-state recruitment numbers right now.”

Now, that Mitchell is an official member of the Sioux Falls Police Department, she said she’s feeling support inside and outside of her workplace.

“It just seems both the community and the people that work within our department have our best interest in mind, which is huge,” she said. “I would say a lot of people who work in other departments, especially in big metropolitan cities, can’t say the same thing. From what I’ve gathered here, people want to come to work to do the right thing and have each other’s backs and keep the community safe, which is the whole point of policing.”

Her husband, Justin, who has a background both in teaching special education and managing a butcher shop, was recently hired by Look’s Marketplace. 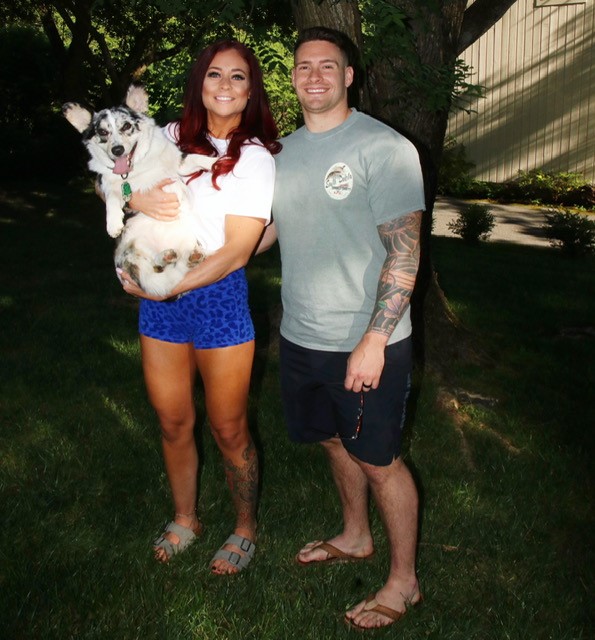 “And he’s very happy there,” she said. “We went to dinner there, and he asked if they were hiring because he had worked at a similar place back home, and all they asked was if he needed another week to settle in.”

“We are seeing one spouse attracted to our city by a fantastic career opportunity, and the next thing you know, the other spouse also has found an incredible next career move,” she said. “And they both find they absolutely love the lifestyle and the community support here.”

That’s definitely been the case for the Mitchells.

“Here, I just get more of a community vibe,” she said. “People interact even if they don’t know each other, and they’re overall more kind and definitely more happy. It just seems like a more warm environment than where I was living. That type of lifestyle wears on you over time. So it’s super refreshing to come to a place where people are happy to get up and go to work every day and spend time with their families. People overall seem more grateful for what they have here.”

To get connected to the Sioux Falls Police Department, click here.