As Zack and Val Jensen drove across the country from Washington to their home in Virginia, the exit for Sioux Falls and the beginning of a world hockey championship happened to align at the same time.

So the Jensens pulled off the interstate, found a Buffalo Wild Wings and spent the night in Sioux Falls.

Before they hit the road again, they visited Bread & Circus Sandwich Kitchen downtown and took a brief look around the city.

“We visited the Falls and drove around and thought it was a cool city,” Val said.

Little did they know, they’d be back.

Months later, a recruiter reached out to Zack, a doctor who specializes in osteopathic neuromusculoskeletal medicine.

“Have you ever heard of Sioux Falls?” the recruiter asked.

It seemed meant to be.

“I thought Dr. Jeremy Storm had a really good vision for the clinic,” he said. “I tend to be more lifestyle-focused, and the opportunity to join a physician-owned group instead of working for a health system was appealing.”

Zack, 44, grew up in California and joined the U.S. Air Force Academy – a career that brought him to Italy, Texas, South Carolina and Arizona before he went to medical school, did residency in Kentucky and ended up in working in Virginia, where he met Val as a master’s student at Liberty University.

Her journey is even more incredible – and timely.

She grew up in Kharkiv, Ukraine, on the border with Russia. She began playing hockey at age 6, playing “seven years at a high level with boys” and had an opportunity to come to the U.S. for to play at 13, until there was a problem with her visa. 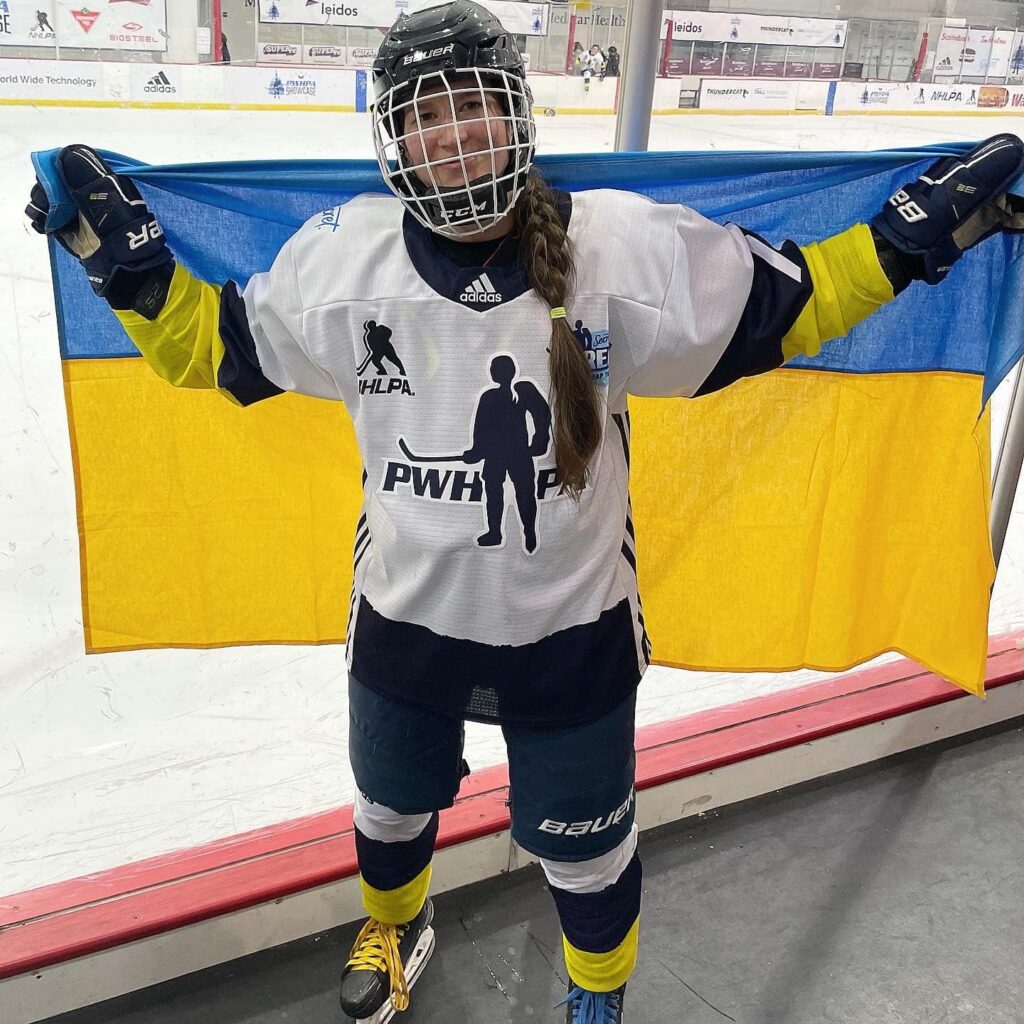 “So I had to change sports,” she said. “My brother was really into boxing, so I decided to try that.” 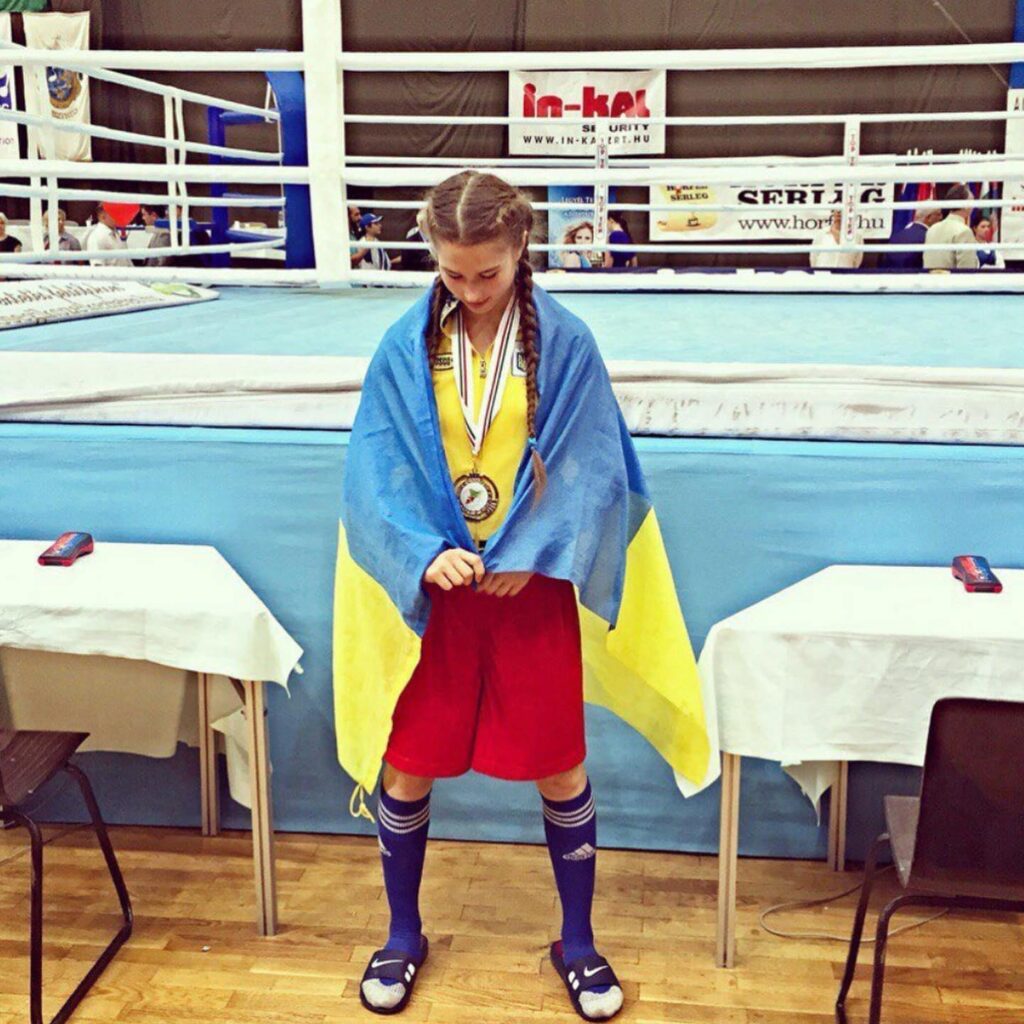 Three months later, she was a national champion in her class. She spent six years on the Ukraine national boxing team, winning three medals in 2015 at the World Goju-Ryu Karate Championship in full contact and even qualifying for the 2016 Rio Olympics before an injury requiring surgery sidelined her. 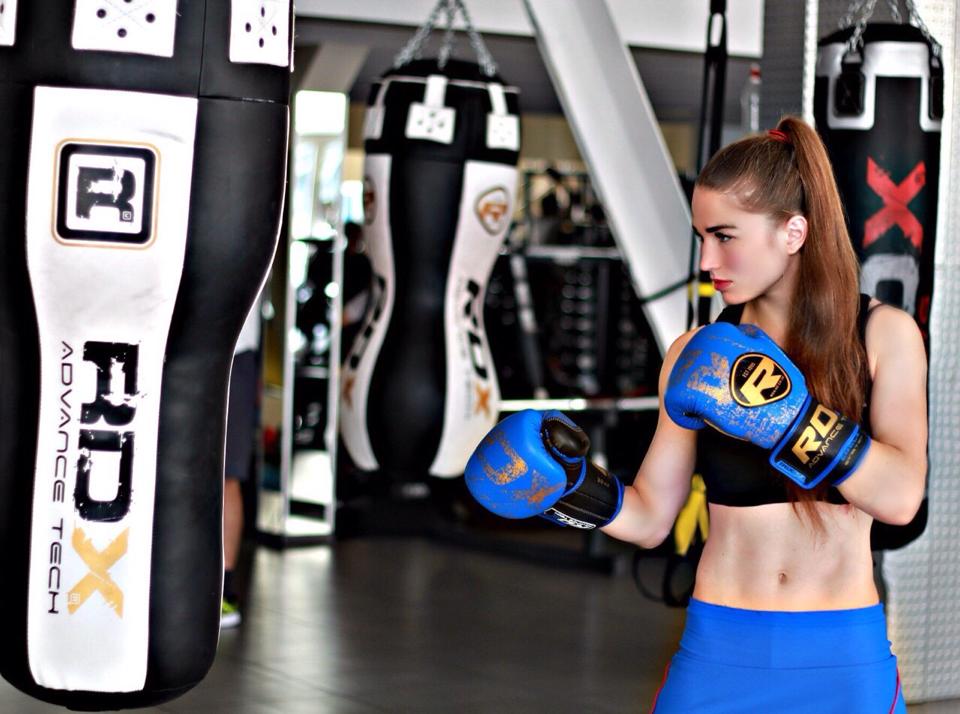 “I switched back to hockey because I really missed it,” she said. “I said if I’m not going to come back now, I’ll never try to pursue my dreams, and I ended up playing pro hockey. I played in Russia for a year, Canada for a year and then committed to Liberty University to play college hockey, and that’s how I ended up coming to the U.S.”

At age 24, she’s continuing to pursue her hockey dreams. She commutes from Sioux Falls to the Twin Cities multiple times a month to play for a team in the Professional Women’s Hockey Players Association, playing alongside Olympians and others at the top of the sport. 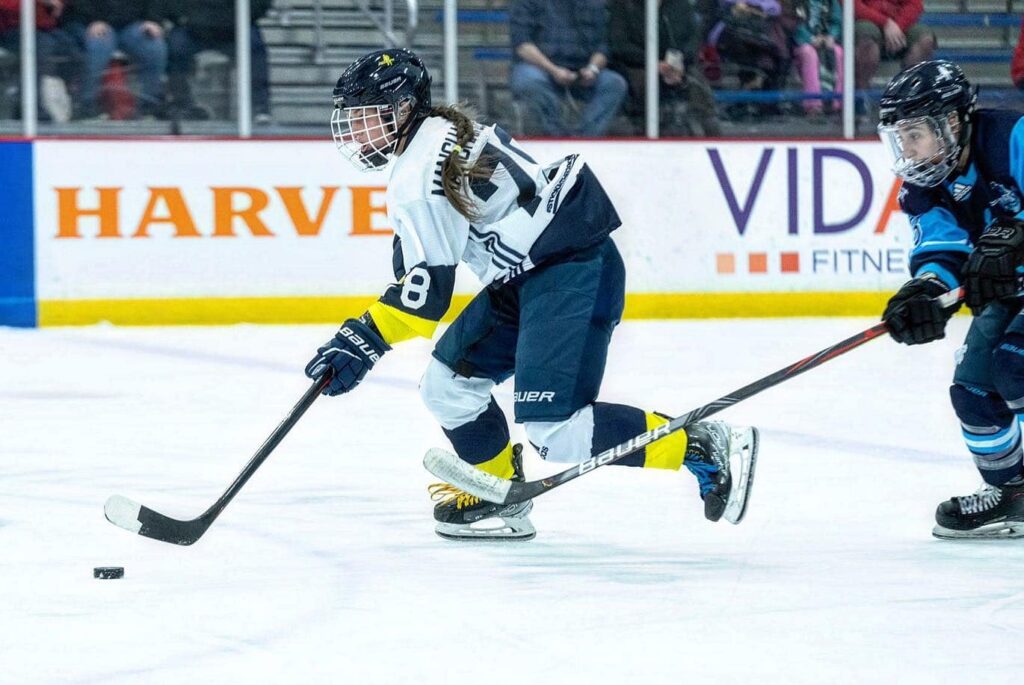 “I drive four hours there and four hours back, and it’s crazy, but it’s the only way I can do it and keep playing hockey because Sioux Falls doesn’t have it yet and Minneapolis is pretty big on hockey.” 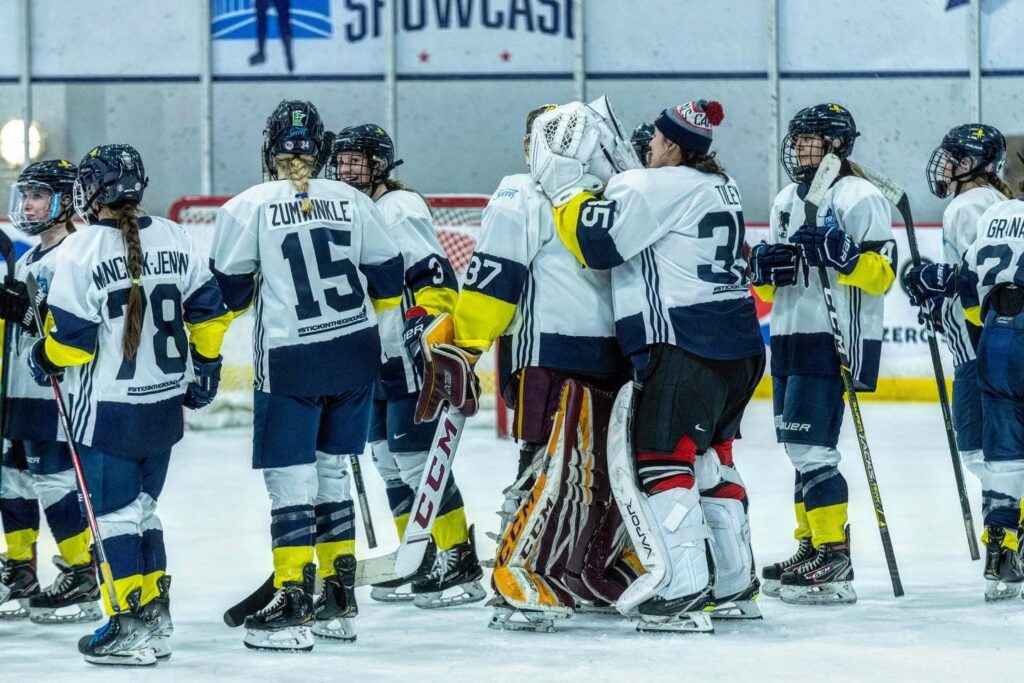 She is becoming connected to the local hockey community, though, and is excited to help it evolve.

“I’ve started to coach, so it’s great, and Sioux Falls is growing bigger every year, and I’m excited to see how it will explode here,” she said. 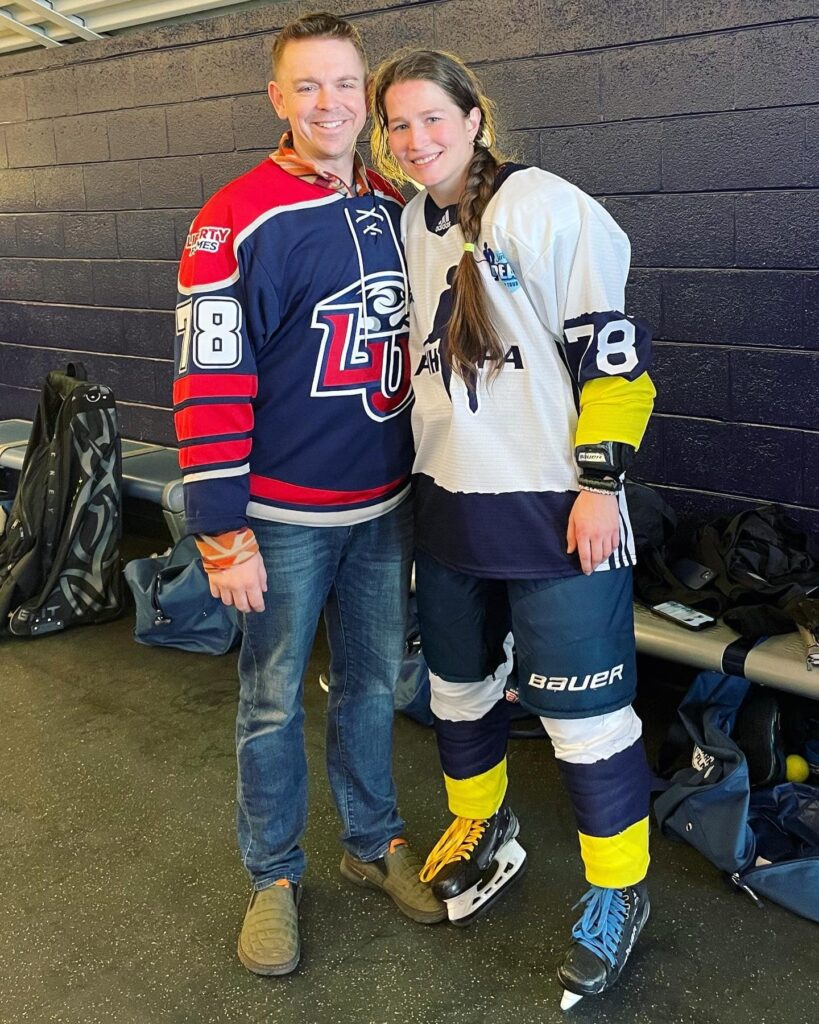 She’s even using her expertise in the sport to support her home country, where her mother, brother and many friends still live.

“I’m on the phone with them every other day,” she said. “My mom is in a safer spot, and my brother is on the border with Romania helping families and people move out from hot zones, so he’s engaged in a community that helps people, and I try to help from here as much as I can through skill session fundraisers.” 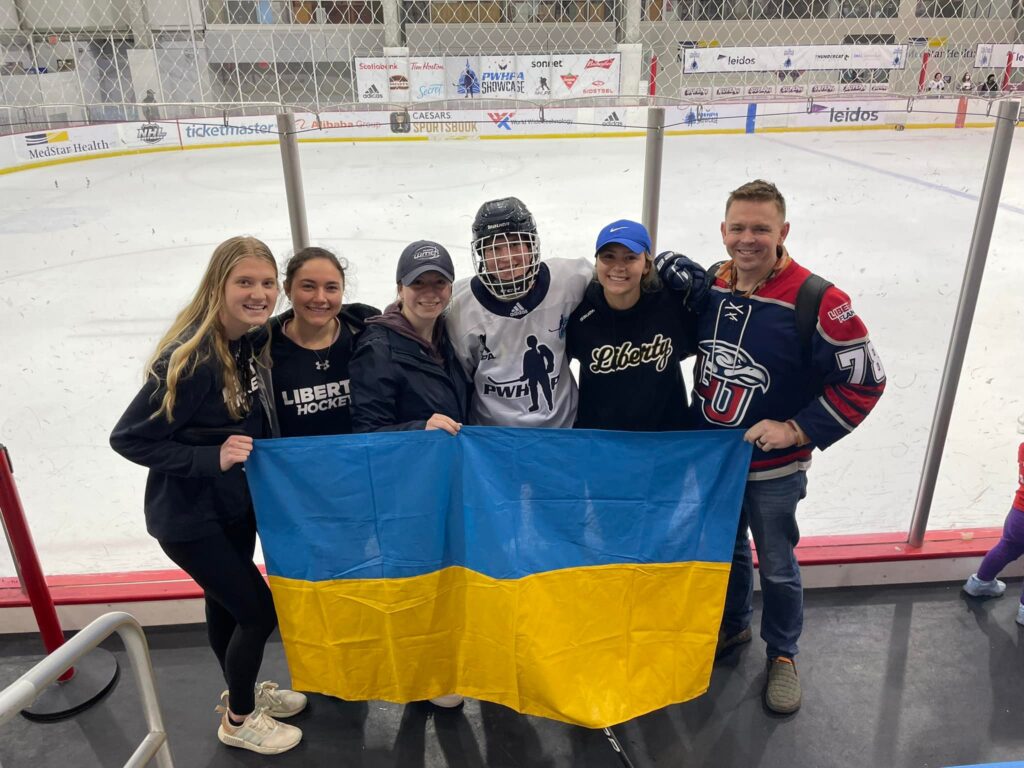 While in Ukraine, she attended law school before coming to the U.S. and worked with the local government in Kharkiv on various projects.

“We brought some changes to the law and were focused on how to make my city a bigger and better place for youth to live and how I would develop sports in the city,” she said. “It’s so painful to see because I grew up there and sort of helped to build that city. I did projects with those kids, and now they’re bombing those kids, so it’s been rough.”

She hopes to bring similar efforts to Sioux Falls.

“I’m excited to get involved in Sioux Falls to help build an even bigger sport community here,” she said. “I think it’s a really great town. I really enjoy the community here. There are a lot of great young people who are starting their business and a lot of opportunity to grow your business, and I think it’s going to be great to be in a smaller town but have the ability to grow it bigger.” 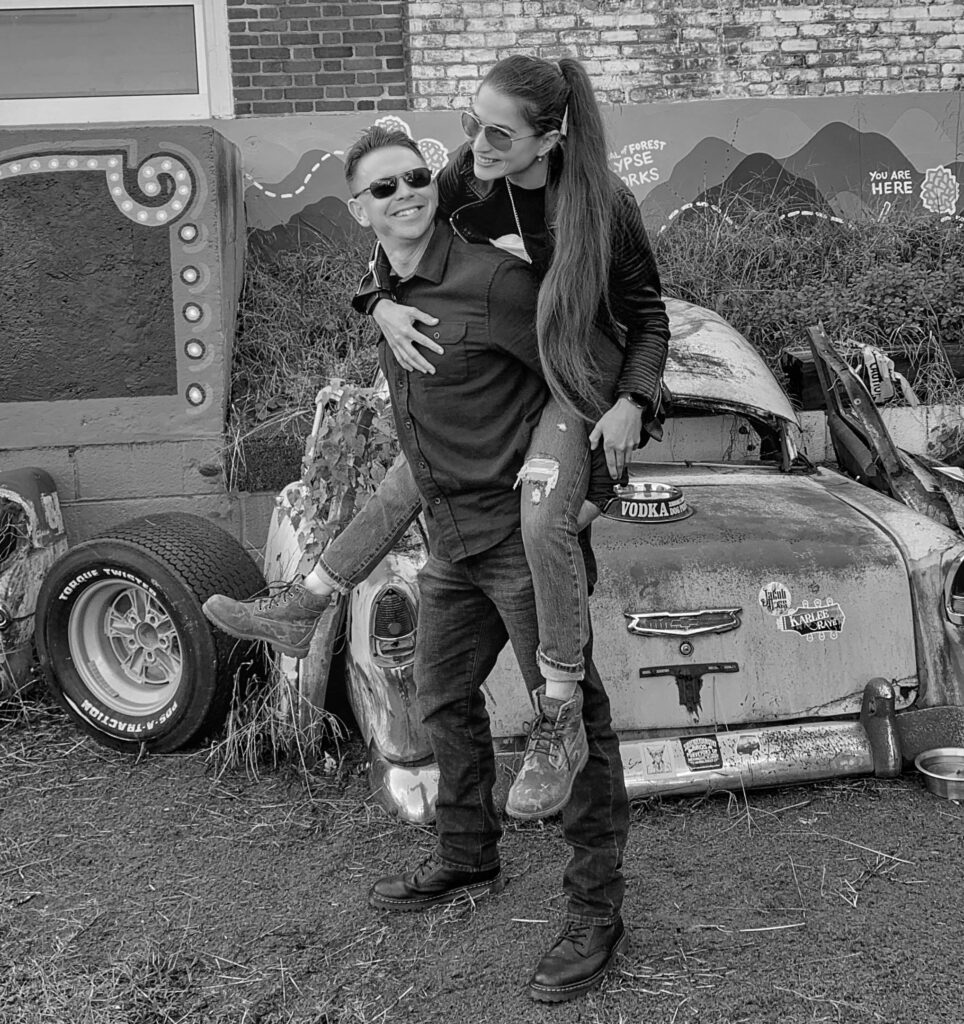 “It’s a top city for entrepreneurship and growth, which is something we were looking for,” he said. “I really like the people I’ve worked with so far. And we’re getting to know a lot of people.”

He plans to serve in the South Dakota Air National Guard, and they both enjoy hiking, hunting and fishing nearby.

“We just couldn’t be more happy to welcome the Jensens to Sioux Falls,” said Denise Guzzetta, vice president of talent and workforce development for the Sioux Falls Development Foundation.

“They have highlighted so many of the reasons that make this community attractive to those at all career stages and backgrounds. This is an incredible place for medical professions, entrepreneurs and people with a passion for sports and becoming involved. We can’t wait to see this couple continue to make their mark here.”