Other than his time in college, Dane Rausch had never lived outside Wichita, Kansas.

That changed a couple of months ago, when the 24-year-old moved to Sioux Falls for a promotion at Novak Sanitary Service as district controller for the Heartland division.

“I actually had never been to the state of South Dakota and knew zero about Sioux Falls,” Rausch said. “The furthest north in the Midwest I’d been was Minneapolis, and I’d never made it to South Dakota.”

But he and his fiancee, Kinley, who got married in late April, were ready for a change. She left her job in marketing at the Wichita airport and started looking for graphic design and social media jobs. 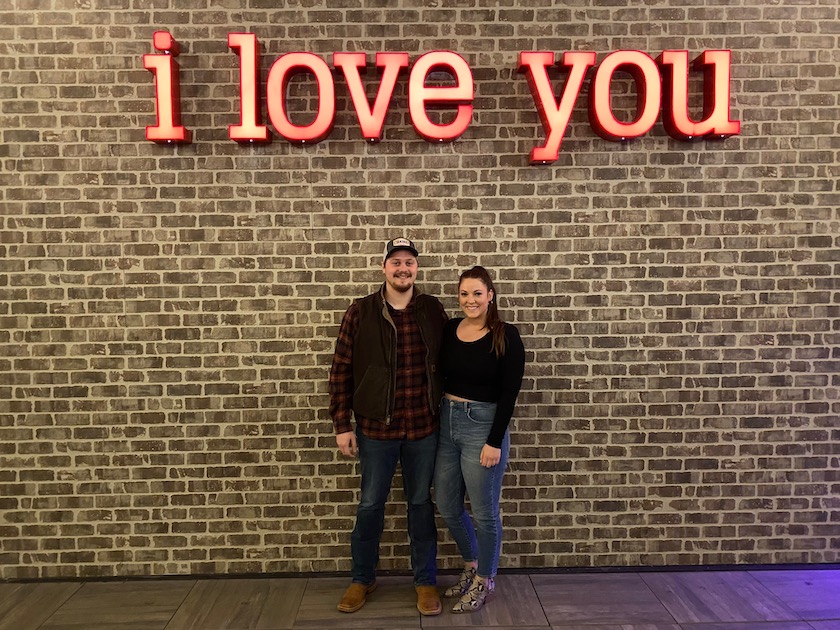 “She’s already said the amount of growth we’ve noticed in Sioux Falls versus Wichita is great, and we don’t think she’ll have a problem finding a job at all,” Rausch said.

“It’s been a crazy couple months with moving and planning a wedding, but it’s been a super easy transition. People have been incredibly helpful, and it’s been way easier than I thought it would be.”

Dane and Kinley are part of a growing number of people relocating to Sioux Falls for career opportunities, said Denise Guzzetta, vice president of talent and workforce development for the Sioux Falls Development Foundation. 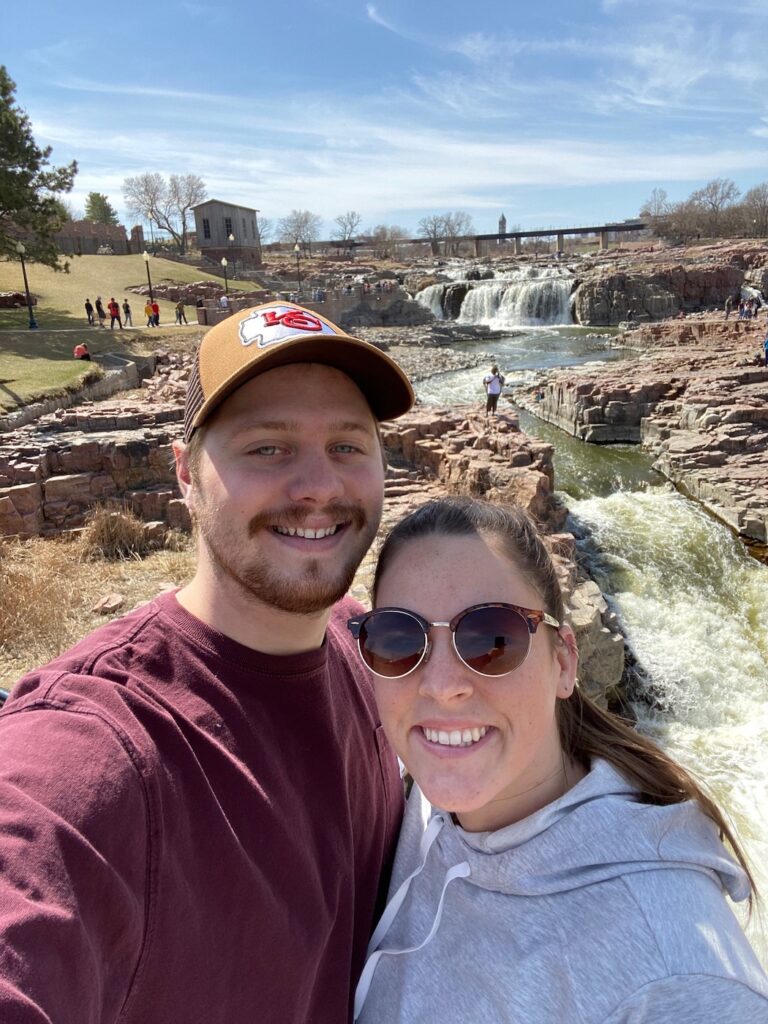 “And that’s not surprising because there are so many opportunities here and more surfacing literally every day,” Guzzetta said.

“In our office, we see everything – from positions at corporate headquarters to the skilled trades, retail and hospitality, and so much more. If you want to embark on a fulfilling career path, we are going to have one that’s a fit for you here.”

Rausch said he was “anxious to see how big or small Sioux Falls felt” and was happy to discover “it still has a nice smaller-town feel. It’s not as overwhelming as moving to Minneapolis or even Omaha, and there is so much more to do recreationally outside than we noticed in Kansas. A lot more parks. There’s a huge dog park, and the downtown scene is a lot more diverse than the Wichita downtown scene. That was mainly bars, and it’s a nice contrast in Sioux Falls. You have your shopping, you have your dining, and you have your bars.” 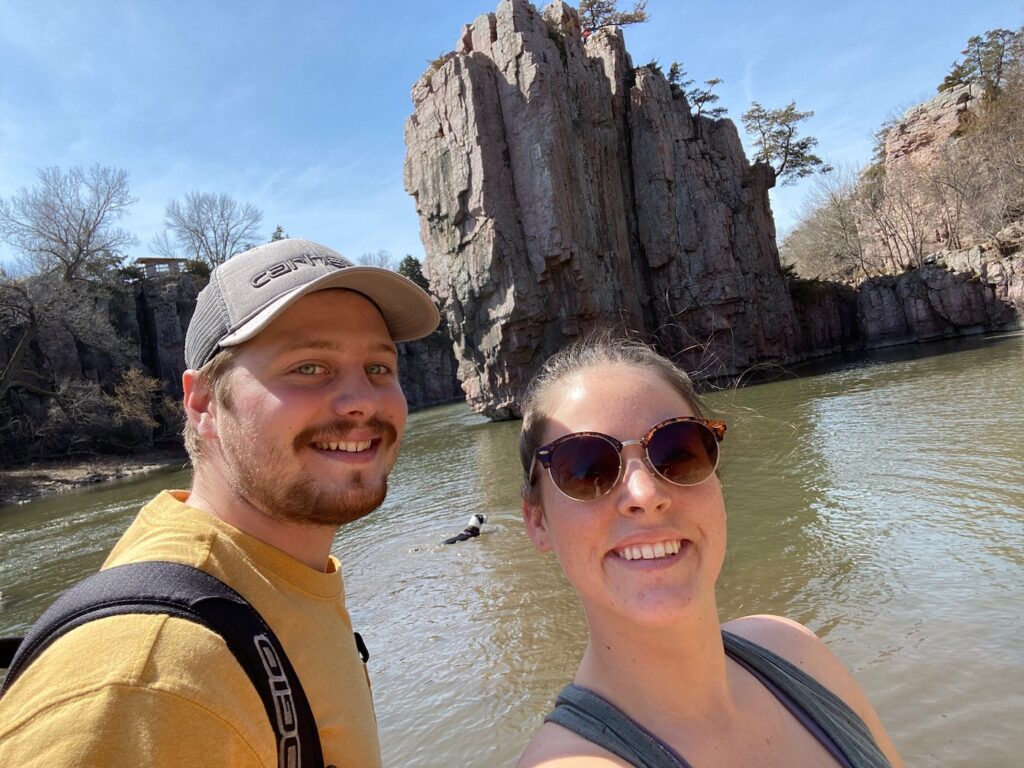 They’re paying a little more in rent than in Wichita, “but the space is almost double what we rented there, and there’s a lot more going on,” he continued. “We came to visit when the Downtown Burger Battle was going on, which was really cool, and there are events and activities that are way more interactive than back in Kansas.”

New college grad Jessi White knew she wanted to move out of her native Kentucky, and she looked to her aunt and uncle for advice.

“They had traveled across the country, and their favorite spot is South Dakota. It’s where they want to live after retirement,” said White, who earned her bachelor’s degree in accounting from Marshall University at the end of 2020.

“I’ve never traveled this far in my life.”

She wanted to work in the area of taxation and found an opening as a tax accountant at Raven Industries. 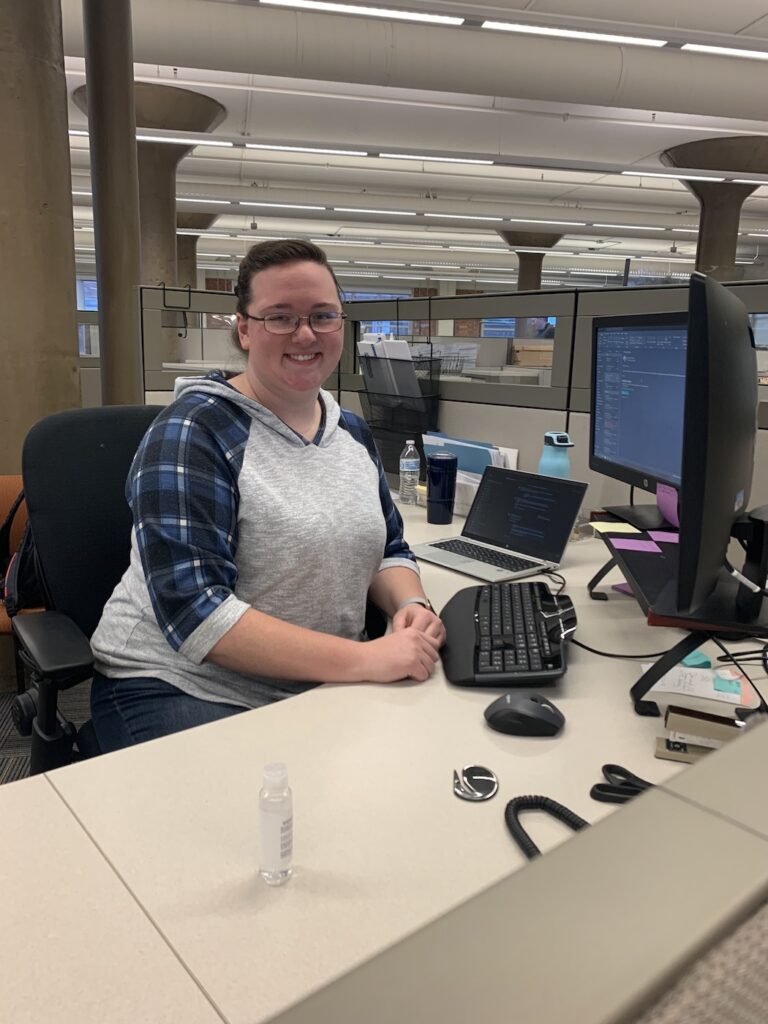 “Everything about the job was something I had always wanted, so I figured why not,” White said. “In South Dakota, you don’t have to pay state taxes. In Kentucky, we do. There were all kinds of benefits when I lined it up. I love the snow – living in a place where I get to experience the four seasons.”

She likes the size of the metro area, around 250,000, because “you don’t have to travel far to go everywhere and do everything. I’ve joined a couple Facebook groups for people new to Sioux Falls, and people are super helpful with places to go and see. I’ve got a list lined up for summer.”

Her co-workers have made her work experience “above and beyond my expectations,” she added.

“I’d only had smaller internships, so it was a little scary moving to a new place not knowing anyone, but everyone has been super welcoming, and everyone at work made sure off the clock I was doing OK. Even though Sioux Falls is a bigger town, everyone is super friendly and nice and making sure I fit in.”

Naz Kahn arrived in Sioux Falls for a role at Raven around the same time as his co-worker – following a much longer journey.

Originally from Bangladesh, he came to the U.S. in 2013 for graduate school and went on to complete a master’s and Ph.D. in mechanical engineering from Purdue University. 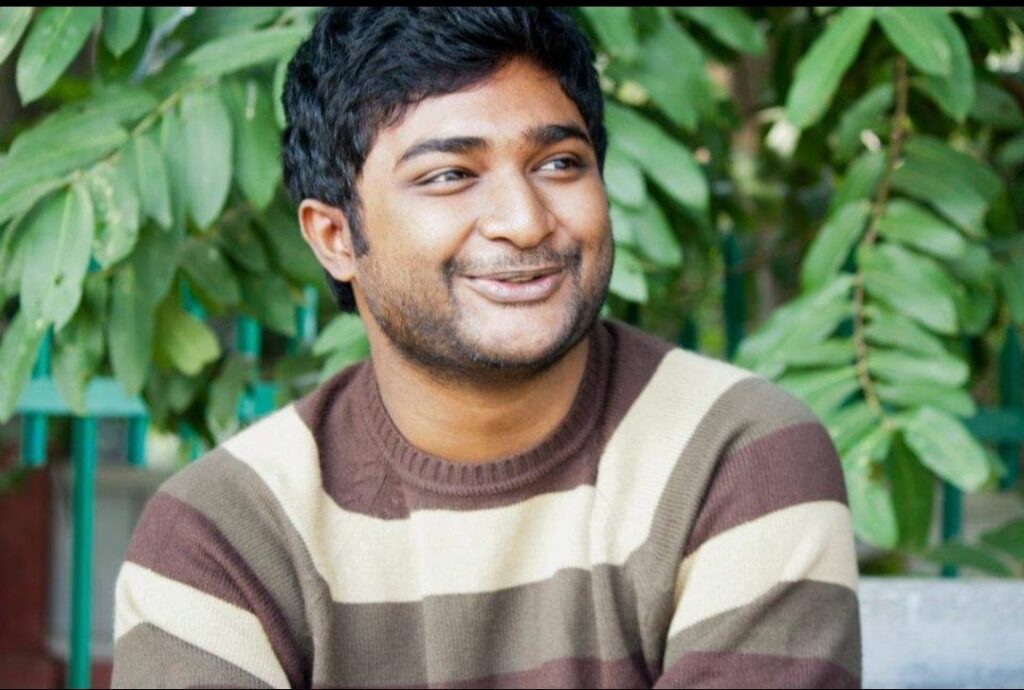 His research focused on agricultural robotics and led him to a role as a senior research engineer at Raven, which is a leader in autonomous agriculture solutions.

“I worked with a few ag companies in research projects, and all of them know Raven is big in this field, so it was really exciting and interesting for me to join here,” he said.

“When I got the phone call for the interview, I searched for South Dakota, and the first city was Sioux Falls, so I figured it must be a big city, but I didn’t know much about it. My parents and my family in the U.S. were excited I was moving to Sioux Falls and knew South Dakota is a nice place for vacations, so everyone is planning to come here this summer and use my apartment as a hub.”

He found a place to live within five miles of his downtown office, and “there is no traffic, which was new to me,” he said.

“When I first moved, I worried about Indian groceries and restaurants, and I don’t know if it was me or luck, but within the last three months, three Indian grocery stores opened, so that was exciting for me.”

He also is enjoying his move and his new career.

“There is no dull day at Raven. Every day, I work on something new,” he said. “The ag project I’m working on now, as far as I know, no one in the ag industry is working on something like this. The problems we have and the solutions we come up with are all new.”

Those later in their career also are finding fresh opportunities in Sioux Falls. Rick Weelborg moved from Houston in October 2020 to become the city’s chief technology officer.

His career had taken him from Seattle to Thailand before Texas, with service in the Army and a resume that includes leadership roles at Compaq Computer Corp., Hewlett Packard and IBM.

He was beginning to grow his own IT company when the pandemic halted new contracts and his subsequent business development. 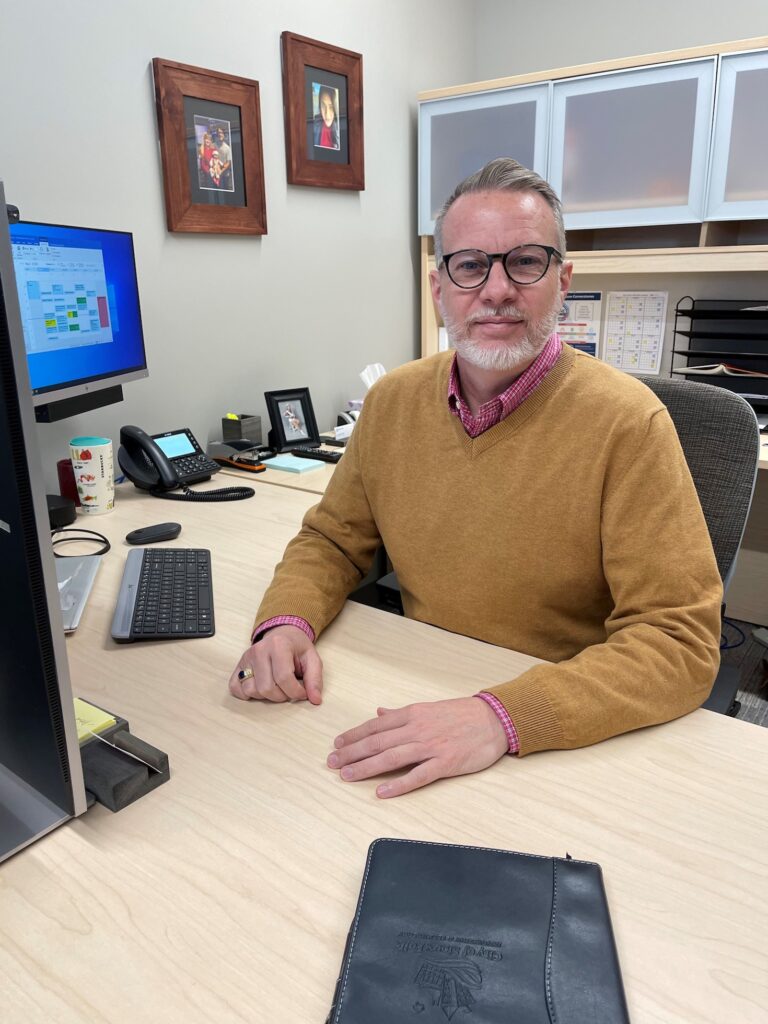 “With everything going on, I was looking and had always been keeping my eye on the region and was looking for a new opportunity coming out of COVID when the chief technology role opened up,” Weelborg said. “There were a lot of things about the position that really attracted me, and it seems like a good fit to get back to South Dakota.”

He grew up in Dells Rapids, graduated from high school in 1987 and spent two years at Augustana University before joining the Army.

“It seemed like coming out of high school we would do whatever we needed to get out of South Dakota and get to a big city, and now I find most of my peers are finding their way back to where we grew up,” he said.

“I think you leave and then realize quickly how good we have it in South Dakota.”

He had moved back between homes on and off over the years but hadn’t spent much time in Sioux Falls for the past six years.

“And the downtown has been transformed, and there’s more to come,” he said. “So I’m really enjoying that and checking out new parts of Sioux Falls that have grown. I’m renting a town house on the northwest side that used to be a cornfield and am still in exploration mode, but eventually I’ll buy a house.” 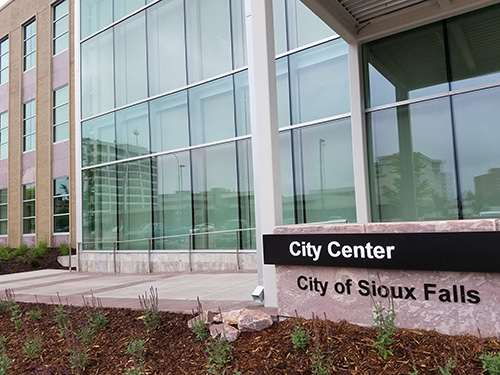 While it’s his first public sector job, he and his director, Mike Grigbsy – who also moved from Texas — and Mayor Paul TenHaken all bring private sector experience to city government, he said.

“This is a very technology-forward administration,” he said. “And my role involves reaching out across the city and looking at – from a technology perspective – what we can do to ultimately provide better services for the community.”

He also has found it easy to connect since moving back, he said.

“Even though I came in November and it was colder and COVID and everything, I was still able to start connecting pretty quickly,” he said. “It’s growing, and even in the last six years, the city is much more diverse, and there’s so much going on, so much growth, which is part of the reason I wanted to move back too.”

Ready to find an opportunity that’s right for you in Sioux Falls? Click here to get started.